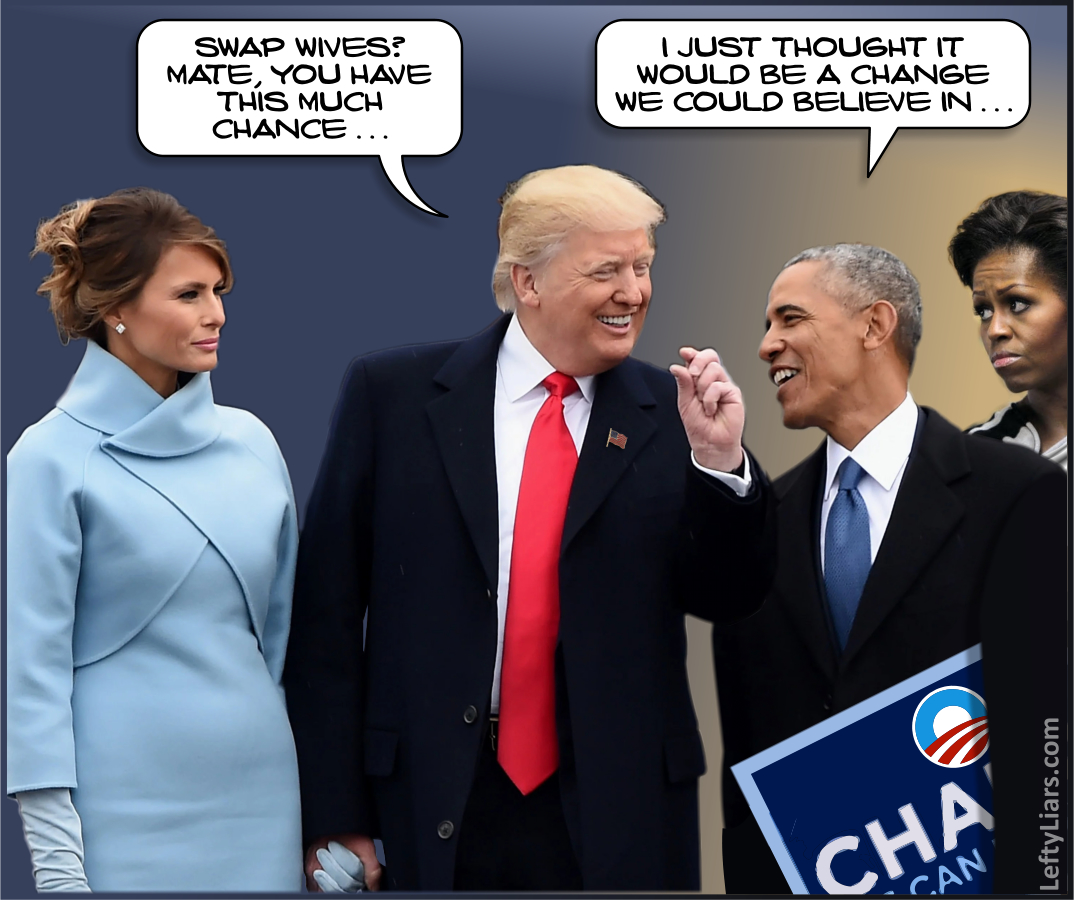 You have to wonder what Barack Hussein Obama II thinks about at night after his big-boned wife climbs in beside him to hog the comforter, grind her teeth, and snore. Does he ponder Donald Trump’s tremendous accomplishments? It is hard to imagine an ex-President tolerating far-left CNN’s mindless propaganda. The retired POTUS must look at Fox News to see what was going on, and in doing so, would be struck by President Trump’s victories. A few phone calls to trusted sources could verify the truth of any he doubted.

Imagine his horror as the unemployment rates for blacks, Hispanics, and women dropped to historic lows. Think of his shock about Trump’s America being the number one energy producer in the world. Can you see Barack propping himself up on an elbow at three in the morning, to consider these matters? I imagine the following:

The hump beside Barack growled in her sleep. Her hot paw lay across his chest. Barack carefully lifted it away, placing it onto the silk sheet beside him before sliding out of the King-sized bed. Padding across the carpet, he quietly closed the door behind him and glanced out a window at the snowy starlit yard below. It kindled memories of the old days when snow outside meant cold inside. Now, it was hot inside. He would have to see Maintenance about that thermostat. Using a remote to lower the temperature, he slunk down to the den’s wet bar for a Dry Martini. A clattering metal ice scoop on the tiles brought secret service goons rushing. Barack waved them gone en route to the living room, where he gazed through large windows at the night sky.

Sitting on the couch, in pajamas, sipping his martini, Obama lit up a cigarette and thought about Trump some more. How did the guy do it? Why didn’t Mueller find any dirt on him? All his friends assured him there must have been dirt. So where was it? Newspapers insisted Trump told a million lies a day. Were they entirely wrong?

Sucking in another lungful of smoke, Barack focused for a moment on a bright star above Washington DC and wondered how Trump made the economy so booming. The orange star, Arcturus, was 36.7 light-years away, which is how far away Obama felt. Perhaps the Orange man came from that distant star. Maybe he was an alien sent to change the world. He remembered his own 2008 campaign slogan about change – ‘Change We Can Believe In.’ Hah. The only thing he changed was to make everything worse. He could see that now, but during his Presidency, he believed his own Party’s hype. He was buoyed continuously by his minders’ praise, and it was all bullshit.

His thoughts turned to Trump’s legions of fans, arenas full of supporters, and how easily he spoke, making them laugh with spontaneous quips and improvisations. By contrast, his own speech was awkward and stunted due to stuttering. With training, he had learned to speak in pieces, each broken chunk of words uttered in a breath, followed by a long pause, and another chunk. It was dull, lifeless, and one dimensional, but at least it was an improvement. He could never say anything colorful or impulsive, like Trump. Indeed, he could in no way utter the truth as Trump did so fearlessly. Imagine telling the press they were all liars. How he wished he could do that, just once.

Barack thought of the dreadful pantomime he had to watch each day on TV, as Democrats destroyed their Party. What were those idiots thinking – impeaching a popular President without any crime? In the space of just three years, Pelosi, Schiff, Nadler, and Alexandria Ocasio-Cortez had made him ashamed to be a Democrat.

Swigging half the glass in one gulp, BO shuddered as the gin hit his throat. The cigarette almost burned his fingertip as he stubbed it out in Michelle’s crystal ashtray. Tomorrow she would nag him about it. Looking at his toenails, he sighed. They grew much faster these days, and his ears were definitely growing larger. He was getting old, and he felt it.

And what about Biden? Fox News always harped about his refusal to nominate the poor fool, but there was a reason for that. He had to save his nomination for Hillary, after her big staged entry into the Presidential race, taking over from Biden before Election Day 2020. Biden was the distraction used to provide a huge contrast as the hero Clinton brushed him aside for her arrival amid the trumpet ensemble and Tabernacle Choir of the media, Hollywood and every Democrat North, South, East, or West of the Rio Grande. The months of agony watching Biden stumble about was merely a setup for her climactic return.

He felt a little sleazy to be involved in such a B-grade plot, and Michelle gave him hell for it. “Why support that wheezy old cracker?” she would yowl. “That white bitch is more corrupt than anyone in politics!”
“She is the only one with a chance at beating Trump,” he would explain. “And she isn’t a far-left nutcase like Bernie Sanders.”
“So, you think she’s a better choice than me?”
“Darling, I love you, but you have to be realistic…”
“Don’t darling me, you sexist pig!” she would hiss, stomping out of the room. “Maybe I’ll just run to prove you wrong!”

Finishing his drink, the old ex-President felt an itch on his cheek. Rubbing it, he found it was wet — a tear. “Great,” he thought. “Now, my eyes are starting to leak.”

Feeling older than his fifty-eight years, the mulatto stood up, bones creaking, and went to the nearest bathroom to pee. It took a while to get the works going. “Even that isn’t working properly,” he muttered. At the sink, he looked at himself in the mirror. “People call you the first black President,” he said, “but your mother was as white as milk, which makes you light brown.” Pointing at himself with his index finger, he stated firmly, “I was the first light brown President. Not black.”

There was a knock at the door. “Barack?” his wife called.
“Just a minute,” he called back.

Damn, the beast was up. He glanced at his watch. Six o’clock. How did that happen?

Barack opened the door to see Michelle standing there in her giant yellow bathrobe. “Who were you talking to?” she demanded.
“You mean whom,” Barack replied. “I was re… rehearsing lines fo… for a speech.”
“Somethin’ about being a light brown president?”
“It was… was a jo… joke.”
Michelle stood her ground as Barack squeezed past her. He suddenly felt like giving George Bush a call for a game of golf.
“Where the hell do you think you’re going?” Michelle yelled.
“Wherever the hell I w… want to,” Barack heard himself say, and it felt good.
“Y’know, I don’t have to put up with this crap from you!” Michelle hollered.
“No, you d… don’t!” Barack retorted. “I know a great divorce attorney, i… if you’re interested.”
Michelle’s jaw hit the floor as Barack skipped up the stairs to the bedroom. He showered quickly before donning a T-shirt and a pair of jeans. This was going to be his day.

Later, on the tenth fairway, he said to George, “Does your wife bug you? Mine tends to stalk me all day and night.”
George was diplomatic. “Oh, that just means she loves you, and a loving wife is worth her weight in gold.”
“Yeah, well, she certainly has the weight,” Barack quipped.
George had to chuckle, and the two of them laughed until Barack started coughing. George slapped his friend on the back. “You okay?” he asked.
“It’s the smoking,” Barack gasped. “I have to give up one of these days.”
“Well, if worse comes to worst, at least you won’t have any trouble getting a lung transplant, being an ex-POTUS,” George grinned.
“True, but what if Trump died the day before,” Obama said, “and he was the donor?”
George went blank for a moment. “Hey, I don’t like the guy,” he said, “but I can’t joke about him dying.”
“No, but how would it look if it happened?” Barack asked. “Me, with Donald Trump’s lungs?”
George played his stroke and replaced the pivot in its hole. “Well, Barack,” he said, “Maybe that would cure your fucking stutter!”
Obama blinked and then smiled. “You’re right,” he agreed. “It might be just what I need.”