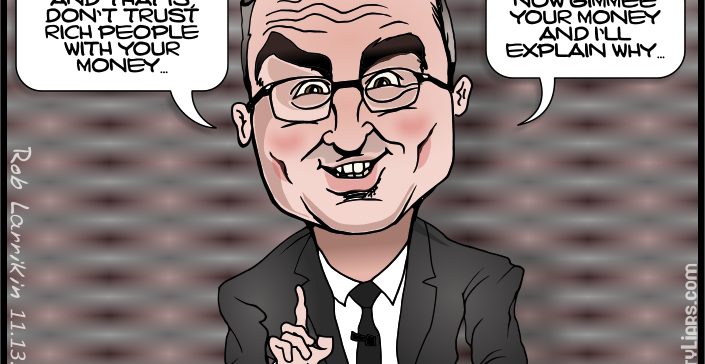 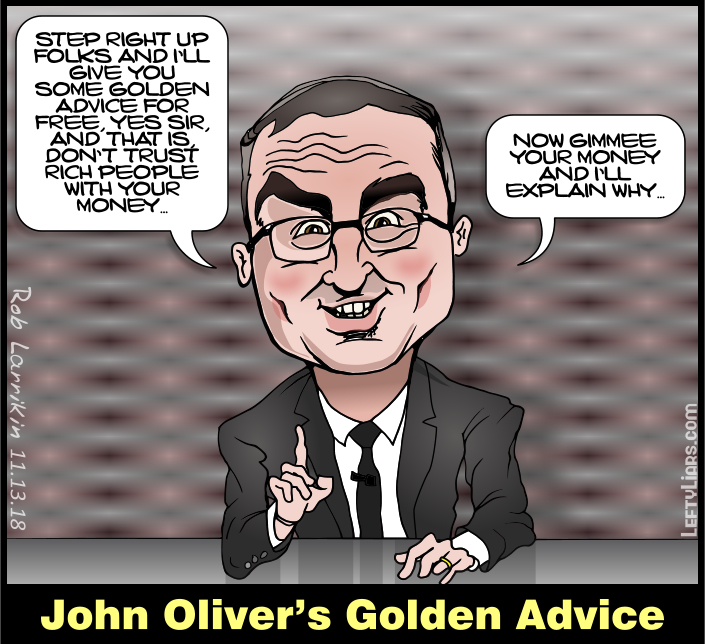 John Oliver sounds like a cockney East London scam artist, and his double-talk tricky reasoning is similar too. It would not surprise me if he comes from a long line of such chiselers, working London streets since the days of Charles Dickens’ Artful Dodger, the boy who taught Oliver Twist how to pickpocket. It is how most London swindlers start in their youth. As adults, they use humor and fast-talk to convince hapless crowds to buy fake jewelry and cheap imitation perfume in the belief they are treasures.

Americans are familiar with carnival barkers and fast-talking car salesmen but not so aware of the virulent and ancient English variety. Watch the following video to see a few examples of cockney touts.

There is nothing worse for us deplorable conservatives while cruising TV channels than to come across John Oliver, Stephen Colbert, or Jimmy Kimmel. In those few seconds, they manage to yell at least one boneheaded comment fueled by Trump Derangement Syndrome. Out of the three upstarts, Oliver is the most odious. His barking brings to mind the swindling scamps that plague East London sidewalks, who use the routine Oliver employs to sell his propaganda. Additionally, his voice goes up and down like a pubescent boy, and he gobbles like turkeys on Thanksgiving Eve.

A good example of cockney con artists at work may be seen in this video, which shows them selling fake perfume in London. The rip-off merchants pay to stand in a shopkeeper’s doorway, pretend the shop is theirs, and tell lies about giving away free fragrance to promote a new store that does not exist. Luring people in with promises of free goodies, two scam artists in the audience pretend to be interested and buy. As a crowd builds, the head scammer tells the audience they can have a package for the bargain price of £20 (about $27 U.S.), which includes several perfumes worth about £1. The video maker explains all this in his description. He said he watched them repeat the ritual three times in thirty minutes before calling the police. Here are the same gang in another two locations: Example 2 & example 3.

When John Oliver cons his TV audience, we cannot call the cops because the First Amendment protects him. When I had to suffer a few seconds of him Sunday night, he was whining about Trump not being able to drain the swamp because he had hired rich people.

Trump, Trump has a laughable number of wealthy businessmen presiding over policies that could directly benefit themselves and their former employers. And incredibly… his supporters do not seem troubled by this.

After that, he did a lot of double-talk, enough to put those London scam artists to shame, to trick his audience into thinking he must be right.

He just said that wealthy businessmen should not be trusted with other people’s money. Banks are owned by wealthy businessmen in charge of other people’s money. Most millionaires have large bank accounts. Where does multi-millionaire John Oliver keep his money? If he is telling the truth, then he cannot keep it in the bank, so it must be under his bed.

Can anyone spell ‘hypocrisy’?