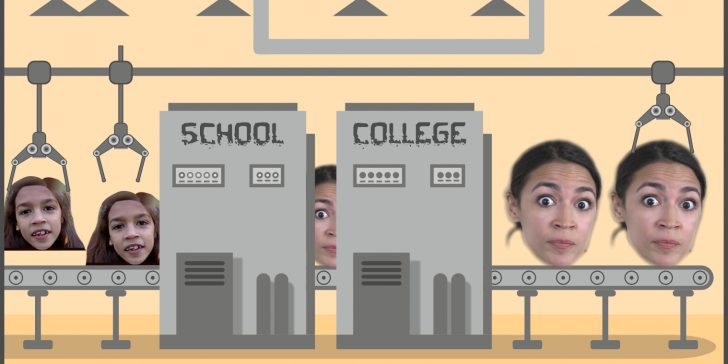 What goes around comes around, and that is the lesson for Nancy Pelosi, Adam Schiff, and Jerry Nadler, who, in their younger years, encouraged Lefties to take over education. At the time, in their thirties, they would have seen nothing wrong with dumbing-down students. Replacing English grammar, American history, math, science, and economics with feminist and environmentalist political propaganda was a necessary and vital step, as far as they were concerned.

I doubt even one of the hapless fools considered what would happen in a generation or two, yet it was entirely predictable. Replace education with Socialist brainwashing, and you end up with young, silly dreamers like Sandy Cortez, Ilhan Omar, Ayanna Pressley, and Rashida Tlaib, entering politics. When dozens of them become Congresspeople, they start demanding ridiculous things, like the impeachment of a perfectly honest, hard-working President.

Thanks to their lack of education, they believe ‘impeachment’ means ‘remove,’ but of course, it means ‘charge.’ Charging an honest and great POTUS with made-up crimes only wastes everyone’s time and destroys the accusers’ credibility and, thus, votes.

Nancy Pelosi was originally against impeaching Donald Trump. As decrepit as she may be, the old fossil understood that without a crime, impeachment would never lead to Trump’s dismissal. He could be charged (impeached), but the charge would be dismissed in the Senate.

Pelosi understood this because her long-distant education was reasonable, allowing her to think logically, despite her geriatric brain. The Squad and their young clones in Congress missed out on real schooling, so to them, Pelosi was speaking a foreign tongue. They insisted on an impeachment come what may, like petulant brats demanding the latest video game. Under enormous pressure, Pelosi eventually gave way to their demands, which led to an embarrassing anticlimactic fiasco for Democrats.

Most kids learn in elementary school that falsely charging someone does not pay. For instance, Mary wants some of John’s drink, but he will not share it. Mary tells the teacher, “John hit me and stole my drink.”
The teacher asks other kids if this is true, and it soon becomes clear that Mary is lying. The teacher reprimands Mary for lying and speaks to her parents about it. Mary finds that other kids no longer trust or respect her. She loses friends as a result and learns the hard way that bearing false witness is not a wise thing to do.

When indoctrination replaced education, many of these kinds of lessons were left behind. Kids would lie and falsely charge others without being reprimanded. Teachers were more concerned with teaching them about tree-hugging than with morals. As a result, two or three generations of Americans grew up without learning basic lessons in life, like the importance of not lying, cheating, stealing, or bullying.

Those brats grew up and entered politics. They happily asserted that President Trump was a liar, criminal, Russian spy, molester, rapist, and anything else you can think of, and shamelessly charged him with – with what? After years of investigation and spying, they could find no dirt on the most honest POTUS in American history.

Though they impeached, the charges comprised muddled-headed opinions and hearsay. Pelosi knew the idiotic impeachment would never get past the Senate, and decided to leave it unsent. In any trial, Republicans would call Schiff and his so-called “whistle-blower” to testify, and grill them mercilessly, which would make them the laughing stock of Democrats. Due to their lack of real education, the Squad and their colleagues thought their fizzled-out nothingburger was a victory!

As a result of the dumbed-down Congresswomen, Democrats backed themselves into a corner. They could see how mistaken their actions were, but were driven on by a slapstick mentality, like a conga-line of myopic lemmings, determined to pull the entire party over a cliff. Commentators on Fox laughed out loud at the antics of Democrats and their Fake News partners in crime.

In conclusion, the Democrats forgot that when you replace Education with Soviet-style indoctrination, you generate millions of dimwits like Sandy Cortez, who will force you to do stupid things and drive voters away. As long as you dumb down the population, you will have congress-critters who cannot reason, filling the Swamp.