Lefty Liars twist nuances in the English language to accuse Trump of falsehoods and lies. Sometimes they do this in an obvious way; sometimes more subtly. Quite often people cannot be bothered sifting through the labyrinthine collection of accusations to uncover the truth. Many conservative talking heads find it too difficult. Lefties rely on this apathy as it means that some of their falsehoods will escape exposure.

In today’s case, I point to PolitiFact (or as I say, PolitiFake) and BuzzFeed regarding a tweet Trump put up 20 March 2017.

The NSA and FBI tell Congress that Russia did not influence electoral process. pic.twitter.com/d9HqkxYBt5

The video was from the House Intelligence Committee hearing on the investigation into whether there was Russian meddling in the U.S. 2016 election. It showed Committee Chairman Rep. Devin Nunes questioning NSA Director Mike Rogers and FBI Director James Comey. Nunes asked Rogers if he had any evidence that Russia cyber actors changed vote tallies in the states of Michigan, Pennsylvania, Wisconsin, Florida, Carolina, and Ohio, and the answer to all was no. Nunes asked, “So you have no intelligence that suggests or evidence that suggests any votes were changed?” to which Rogers replied, “I have nothing generated by the National Security Agency, sir.” Nunes asked Comey if he had any evidence at the FBI that any votes were changed in the states that he mentioned to Admiral Rogers, and Comey replied, “No.”

Trump then quite rightly summed it up by tweeting:

The NSA and FBI tell Congress that Russia did not influence electoral process.

They had no evidence, and many months later, in 2018, the House Intelligence Committee found no evidence of collusion between President Trump’s campaign and Russians. The report concluded that the Russian government’s minor meddling in the electioneering was not intended to help Trump beat Hillary Clinton.

Anti-Trump members of intelligence agencies, mostly put in place by Obama, predictably disagreed, saying they “believed” the Kremlin sought to undermine Clinton and assist Trump, without coming up with a smidgeon of evidence to support that notion. They used the same “guilty until proven innocent” faulty reasoning during their attempt to burn Kavanaugh at the stake months later. The Democrats erroneously believe it is okay to think someone is guilty without evidence, but that is the last thing a Federal Bureau of Investigation should think!

Predictably PolitiFake and BuzzFeed disagree. BuzzFeed’s Mary Ann Georgantopoulos compiled a Gish Gallop of “Trump’s Lies And Other B*******,” and first on her list is the accusation that his March 20 tweet was a lie. She wrote [emphasis mine]:

Lie: Trump posted the… tweet just hours after FBI Director James Comey and National Security Agency Director Mike Rogers began testifying about Russian interference in the 2016 election in favor of Trump. Comey testified that the FBI came to believe that Russia was using “active measures” to hurt the Clinton campaign and help the Trump campaign.”

Yes, Ms. Georgantopoulos; Comey and Rogers believe that Russia was using such measures, but their belief is not based on evidence or facts, as they testified. Democrats ignored the universal human right of a presumption of innocence, which is why they chose to believe Supreme Court Associate Justice Brett Kavanaugh was an alcoholic rapist without evidence or facts. Comey and Rogers served their masters in the Democrat Party with an identical appetite for the ‘guilty without evidence’ ideal. Trump believes in the rule of law, so he summed up their lack of evidence as any judge would; The NSA and FBI tell Congress that Russia did not influence electoral process.

Comey and Rogers did tell Congress that Russia was not an influence on the electoral process, but then they added, “We believe they were.” That’s like a man with a smoking gun saying, “Yes, I did shoot this lady, but I didn’t shoot her. The aliens inside my head did.”

PolitiFake’s Lauren Carroll accused Trump of lying in the tweet for similarly cockeyed reasons. She wrote, ‘Trump said, “The NSA and FBI tell Congress that Russia did not influence electoral process.” Rogers and Comey never said this — not in the video clip Trump shared, nor at any point in the five-hour hearing.’

This is where a good understanding of language is essential. If English is not their first language, and their parents’ first language, or if their English teachers spent more time teaching Marxism than English grammar, young reporters will inevitably misinterpret Trump’s words. He wasn’t quoting Comey and Rogers – he was summing up their statements as any reasonable judge would: that Russia did not influence the electoral process.

So who is Mary Ann Georgantopoulos and Lauren Carroll? 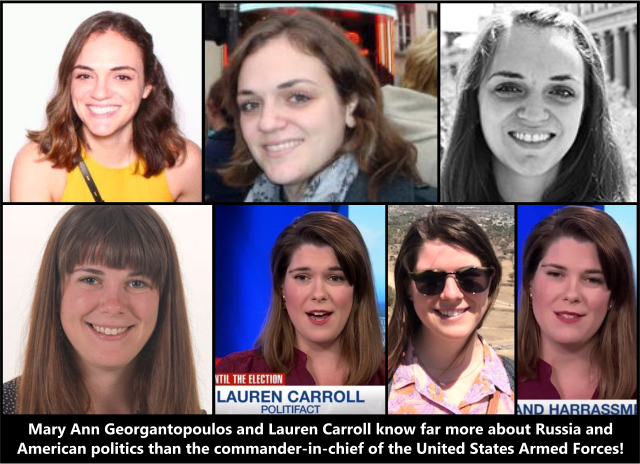 Just how desperate is Fake News, that they fill the trenches with these kids?