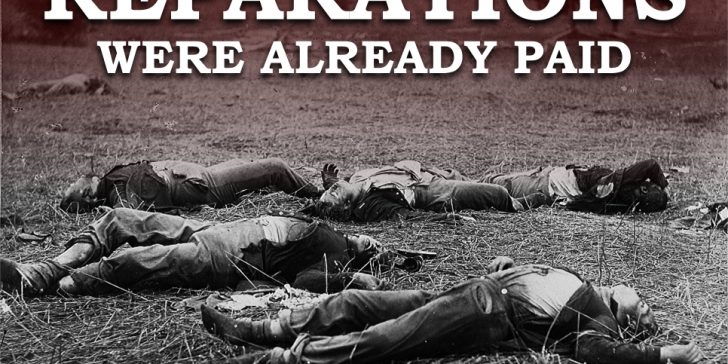 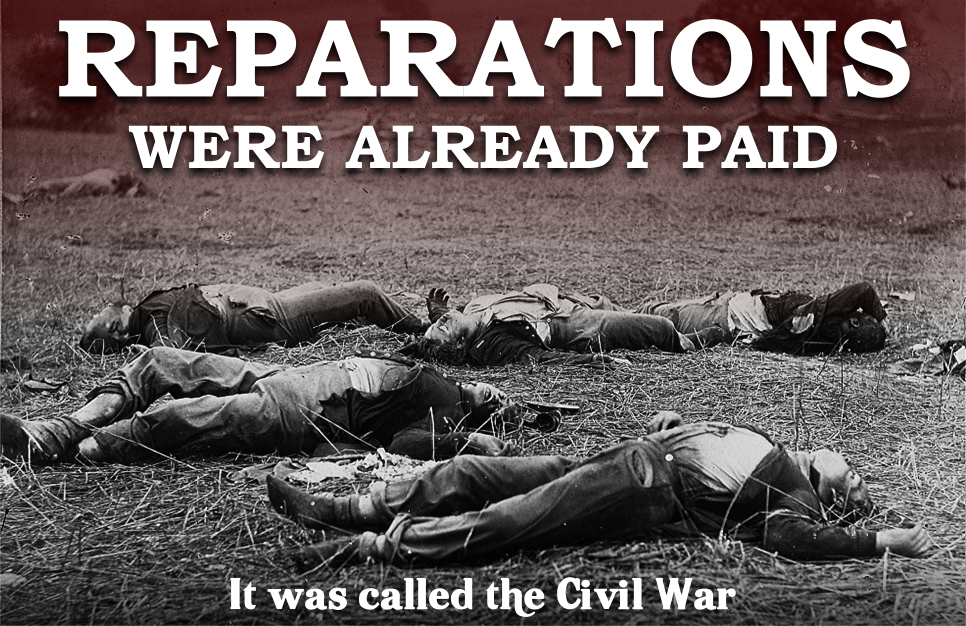 Democrats and other socialists are now demanding reparations for blacks because of slavery, but those reparations were paid 153 years ago, in the form of the American Civil War.

About 330,000 white Union soldiers died during that war, either killed in action or from wounds and disease. They gave their lives to free blacks from slavery. By dying for that cause, they put an end to all the children they would have had in the future.

If 30 years is a generation, there have been 5.1 generations since that time. In those days, people had more children than today. It was common to have seven or eight children. These days it might be two or three. Not all the soldiers had children, and others died from other causes, so let us say the average was four and make today’s 1.5. An average of those numbers is 2.75, so we’ll assume the average person between then and now had 2.75 kids. Now take out the .75 for other things, like wars, drugs, suicide, murder, and so on, leaving us with just two.

Two children for each person between then and now, on average. The population growth figures look approximately like this, starting with the 330,000:

Remove the Civil War, and about 12 million Union soldiers’ descendants would be alive today, nearly Pennsylvania’s population. By 2040 it would have reached 21 million unborn union soldier descendants – about the populace of Florida.

That is one price white men paid to free blacks.

The monetary cost of the Civil War was about $8.3 billion, and later, for pensions and veterans benefits, another $3.3 billion. 1865’s $8.3 billion is about $129 billion today. $3.3 billion in 1906 is around $93 billion nowadays, a total of about $222 billion. It is more when you consider the wealth that would have been generated by the missing millions of white descendants, including jobs, businesses, buildings, houses, cars, jobs, bank accounts, et cetera, all gone.

Aside from the original 330,000 whites who died and sacrificed their millions of descendants to free blacks, there were all the millions of other whites who voted to make the lives of blacks freer. What about the millions of whites who employed blacks or lent them money? Many would do so despite pressure from peers not to. Many sacrificed career and social opportunities by doing so. Liberal blacks eager for a handout forget those whites. Conservative blacks have not forgotten; they remember and are grateful to Republicans for dying by the score to free slaves and oppose the Democrats’ Ku Klux Klan. They are thankful to Donald Trump for lowering their unemployment number to its lowest level ever and re-charging the economy.

Whites have paid an enormous price for the mistakes made by some whites in the past.

There are many other problems and inconsistencies with the idea of “reparations.” Consider that the slave trade was alive and well in Africa since antiquity, many centuries before the United States existed, and included white slaves. From Wikipedia:

Davis estimates that 1 million to 1.25 million Europeans were enslaved in North Africa, from the beginning of the 16th century to the middle of the 18th, by slave traders from Tunis, Algiers, and Tripoli alone (these numbers do not include the European people who were enslaved by Morocco and by other raiders and traders of the Mediterranean Sea coast),[3] and roughly 700 Americans were held captive in this region as slaves between 1785 and 1815

Aside from that, African tribes had enslaved other Africans for thousands of years, just as American Indians enslaved other Indians, as did most stone-age people. Humans did this as a matter of course, for a good reason. Put yourself in their position. You attack another tribe, killing all their men because they could hurt you, but spare women and children. Immediately you are faced with a moral dilemma. If you leave the women and children there, they will perish since there are no men to protect them. Some would say, “So what? Leave them to die,” and often did. Others would say, “No, we cannot do that. We will take them with us.”

They would argue. One tribal leader would quarrel with another over the matter.

Trugo:  Let’s go.
Glott:  We can’t just leave these women and children. They’ll die.
Trugo:  Who cares? Why do you bother?
Glott:  Why not take them?
Trugo:  They are the enemy!
Glott:  They are just women and kids. We can keep them.
Trugo:  For what? So they can poison our food?
Glott:  They would serve us. They can be of use.
Trugo:  You’re pathetic, Glott. You always were a weakling.
Glott:  They can give us more children. Make our tribe strong.
Hiss:  I agree with Glott. They are an asset. Why throw them away?
Trugo:  Nonsense! By the gods, they will curse us!
Glott:  No, the gods will protect us.
Hiss:  Trugo, I outrank you. We will take them.
Trugo:  Even these? [points to a group of old women]
Hiss:  Leave them behind. Take the rest.

In this situation, it is easy to see how our ancestors adopted slavery. They were doing the survivors a favor by taking them, and by that logic, the survivors could pay them back by being useful and doing tasks. The following is is how a captured woman might reply to her child’s complaints:

Scene:  Captured slaves walk in single file back to their captors’ camp

Terl: Follow me, child, and say nothing.
Mikka:  But ma, what about grandma?
Terl:  She will be fine, now keep quiet.
Mikka:  But they are making us slaves!
Terl:  Would you prefer to be dead?
Mikka:  Of course not.
Terl:  Then, hush – at least you will have a life.
Mikka:  Will we ever be free?
Terl:  Free from wild animals? No. Free from disease or war? No. Slavery is not a great thing, but we will have protection, shelter, food, and water. It is better than dying.
Mikka:  What about dad? They killed him.
Terl:  He is with the gods now. He is happy. Don’t talk.

In short, slavery in those ancient times was better than being without a husband or a tribe. Without them, a woman and child would not last long. In recent history, slavery becomes much worse since women and children can survive today in modern civilizations. Thus slavery would be a terrible thing to have to tolerate.

Even so, modern slavery exists. White people are enslaved all around the world all the time. Gangs of human traffickers abduct white females, shoot them full of drugs and force them into prostitution. Billions are made each year from this trade. The culprits include Africans, Arabs, Asians, Hispanics, East Europeans, and others. Millions are affected. Those who do not cooperate are often punished, mutilated, tortured, raped, or murdered. Their families are impacted, too, in multiple ways. The amount of pain and suffering is immeasurable because most slavery is invisible. Asking governments for crime statistics is like asking blind people how many freckles they have. Whatever bureaucrats say, it is probably fifty times worse.

Another problem is the fact that millions of whites and blacks moved to the United States after slavery ended, and ever since. Some intermarried with other people who were descendants of slaves. Today’s vast tangle of ancestors is impossible to unravel, allowing cheats to take advantage of such reparations. If professional white political people pretend to be Cherokee Indians, it is apparent that millions of people will insist they have black blood or were related to slaves. Everyone will have their hand out.

All humans’ ancestors were slaves to another group at some stage in the past. What do we do, form a giant conga line around the Earth and pass money from one person to the next? When the money you gave the guy in front eventually returns to you, we can all go home.

Consider all the other forms of pain and suffering that exist. Gay people have been persecuted and murdered for millennia, stretching back through human history. There would have been retribution for anyone seen as different, going back to the earliest hominids. 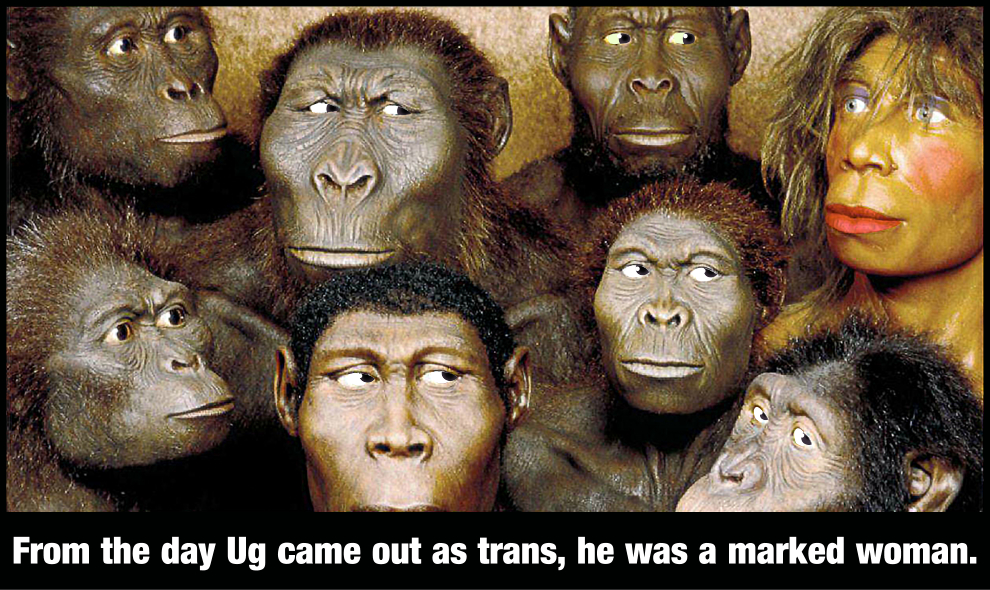 If Lefties get away with this reparation absurdity, it will open the doors to all interest groups to claim reparations for the pain their kind went through in the past. It will include gays imprisoned for being homosexual or whose ancestors were hung or imprisoned for the same. It will consist of all those punished in the past for smoking marijuana, now that it is no longer illegal in many states. Prostitutes will want reparations for all the millions of times they were arrested, imprisoned, and murdered down through the ages, and let’s not forget Jews, who have been hounded and persecuted for thousands of years.

Ugly people could be next – all the obese people with large honkers, flappy ears, piggy eyes, flat chests, yellow teeth, halitosis, victimized for centuries, refused by Hollywood, jilted by modeling agencies, denied by exclusive clubs, and rejected by casting directors everywhere. They will want reparations for psychological torture. Pedophiles will be there too, when age-of-consent laws lower to 11, wanting compensation for being imprisoned so many times. People fined for speeding will wish to have reparations for all the fines they paid before speed limits rose. If we extended this lunacy to the rest of the animal kingdom, think of the compensation they would want, going back to the beginning of life itself. Hermit Crabs would desire payment for all the shells stolen from them.

We could have an endless list of such grievances. Or did liberal blacks think they were the only people whose ancestors suffered?

What an ego on those people. What a greedy bunch of whiners. They believe the world owes them a living because strangers centuries ago did something bad. Cry me a river. They should grow up and stop making up excuses for what is nothing more than begging.

I am sure Jussie Smollett and Don Lemon (pronounced lemon, as in the fruit) dispute this. The fact that no-hopers like them disagree is all the proof you need to know I am right.