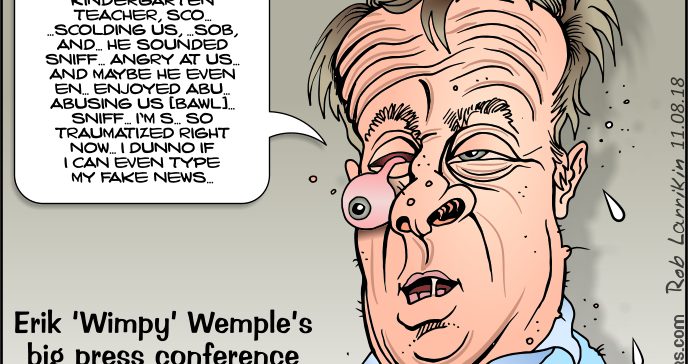 At President Trump’s post-midterm election White House news conference yesterday, Abilio James “Jim” Acosta was up to his old tricks, and as usual, the media aired snippets of his tussle and took his side. Acosta, whose father was a Cuban refugee, was his usual rude self, hogging the microphone and berating the President with his Leftist diatribe. He has been banned from the White House until further notice. Good riddance.

It is interesting to note that of the 1.5 hour-long news conference, Abilo’s tantrum only took up 2.7 minutes, but received nearly all the publicity. All the other essential things Trump said were ignored by Fake News

Abilo Costa went straight to his Twitter account to bawl about being banned and to preach about how we are all Americans. Well Abilo,  you are no American. You are, as President Trump says, the enemy of the people. You represent the press about as much as Pravda constituted the press – under Stalin.

Of course, Abilo’s comrades were out in force chanting their support for him. Like this Washington Post article by Erik Wemple. His heading whines:

Republicans lost the House, so Trump took it out on the media.

In fact, Trump had an outstanding victory, and CNN took out their anger on Trump, through their reporters. Nonetheless, Wemple wrote:

Trump presided over the news conference like a poorly trained kindergarten teacher, repeatedly scolding people to sit down or be quiet… As miserable as he sounded, as awkward as he appeared, as unsettled as he clearly was about losing the House, Trump hung on for question after question. Maybe he enjoyed abusing the assembled reporters. Maybe he had nothing else to do, like watching TV, knowing that the cable news networks were covering this event live. 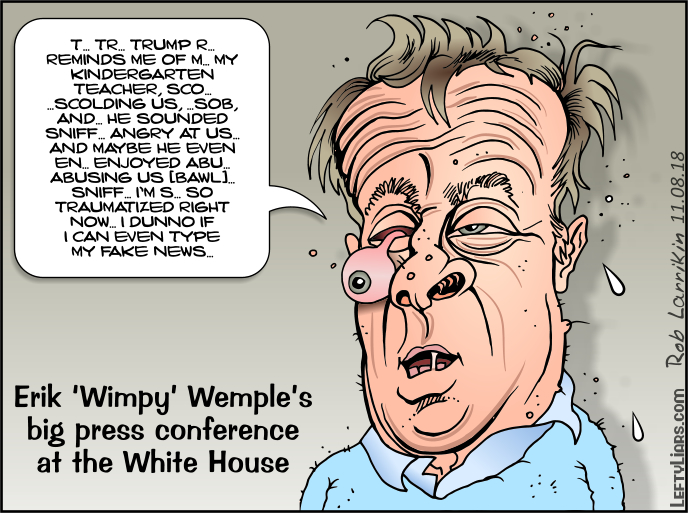 I watched the press conference, and President Trump handled it correctly, as he always does. He stood up to the NPC press robots, and let them know who was boss. They hate being given orders, and act like a protected species. In fact, they were a protected species thanks to unions. This is why you rarely hear about journalist murderers, rapists, or pedophiles. They feel invincible, but Trump is not buying it. They are not only human but often the worst kinds of dimwits. Like actors and singers, they think their dandruff is star-dust.

CNN found the spectacle sufficiently unseemly as to release this statement:

This President’s ongoing attacks on the press have gone too far. They are not only dangerous, they are disturbingly un-American. While President Trump has made it clear he does not respect a free press, he has a sworn obligation to protect it. A free press is vital to democracy, and we stand behind Jim Acosta and his fellow journalists everywhere.

There were six lies in the above.

1) The only ‘spectacle’ was Acosta’s bad behavior, which CNN paid for.

2) Since CNN paid Acosta, they would not consider his bad behavior unseemly.

3) Wemple has his facts back to front. Attacks by Fake News on the POTUS are way out of control, and Americans are sick of it.

4) What is dangerous is Fake News whipping up Democrats to attack others in the street, in restaurants, at their homes, and at work.

5) That behavior is un-American. So is Socialism, which they promote enthusiastically.

6) The President has made it clear he loves and respects a free press. On the other hand, he hates Pravda-like propaganda from the enemy of the people, Fake News.

So who is this knucklehead Erik Wemple?