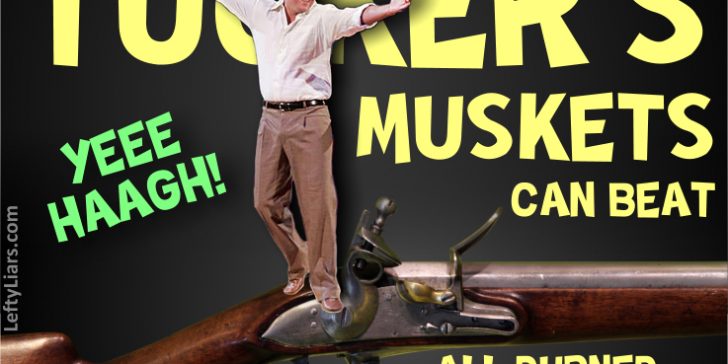 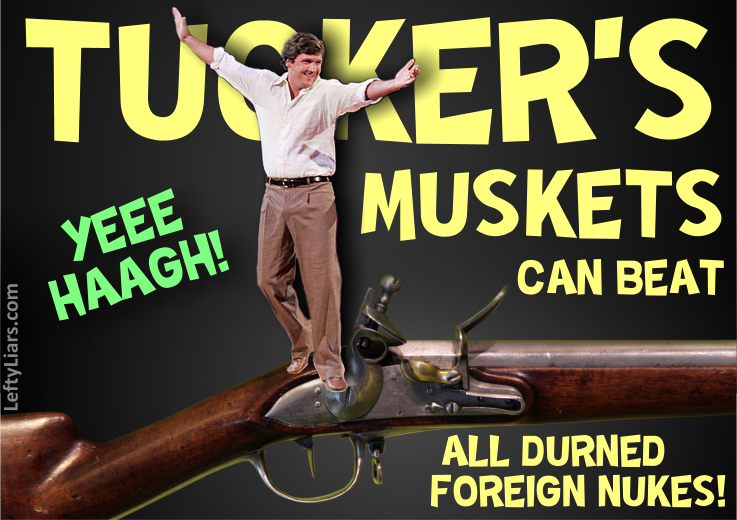 Tucker Carlson is one of my favorite commentators, but sometimes his libertarianism trips him up, and he begins to sound like a plain old anti-war liberal. Like most libertarians, he thinks that modern America should stick with 19th Century isolationist ideologies. In 1801 Thomas Jefferson said that one of the “essential principles of our government” is that of “peace, commerce, and honest friendship with all nations, entangling alliances with none.” He also stated that “Commerce with all nations, alliance with none,” should be the motto of the United States.

President Jefferson was right, but that was before we could communicate at the speed of light. Jefferson’s weapons consisted of muskets, cannon, leaky wooden ships, horses and bayonets. 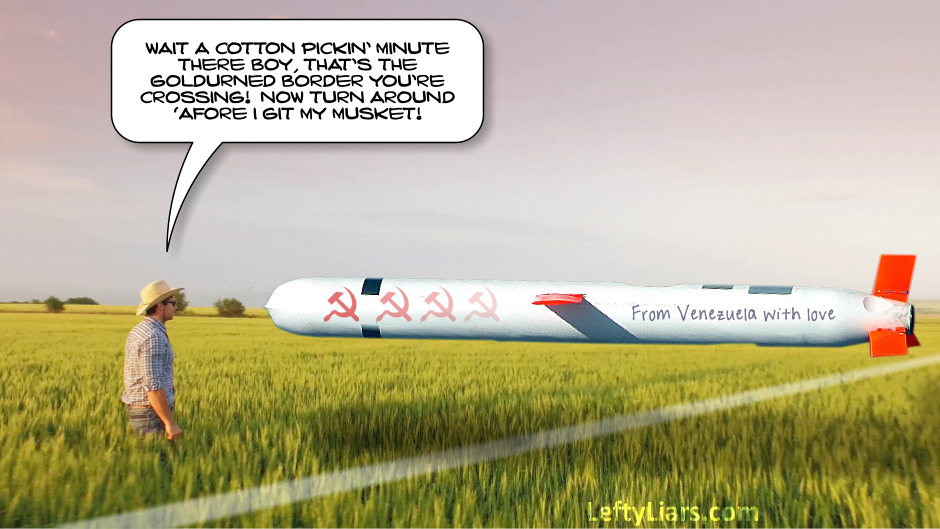 The enemy today is in our face, the world is much smaller in terms of delivery, and you cannot sit on a horse behind a border and think you are safe. You are not. Presidents Washington and Jefferson would agree if they were here today. “In this situation, we need to have allies and bases to monitor enemies before they strike,” they would say. “Our previous comments were correct for the 18th century, but totally out of place in a world with electricity, phones, nuclear missiles, satellites, and suicide bombing terrorists.”

Last Tuesday, April 30, Tucker Carlson spoke about Venezuela and made his isolationist, anti-war views clear. Here is the video, and I address his main points below that.

Tucker: Will the overthrow of disputed President Nicolas Maduro make Venezuela a more stable and prosperous country? More to the point, would it be good for the United States?

Things could not be much worse in that Socialist wreck. Nicolás Maduro will allow Cuban and Chinese communists to grow and establish bases there, and a future war with America will be all the more bloody and costly. Tucker’s grandparents learned this during WWII. American isolationists slowed U.S. entry into that battle, which cost 418,500 American lives, 4 trillion dollars in today’s money and six years to finish.

Isolationists are like those who neglect sore teeth. When you tell them to get the teeth looked at they whine and moan, “Ah, leave it alone, it’ll be fine.” Eventually, teeth are infected, and the sufferer develops Periodontitis. What was a minor $140 job to save the teeth is now an expensive series of operations plus a pulled molar.
Similarly, when you point out all the trouble Maduro will cause in the future, Isolationists whine, “Ah leave him alone. That’s his business. It’ll be fine.” They said the same about Hitler.

Tucker: Lots of people claim to know the answer to that, but they don’t. They have no idea. If recent history is any guide, nothing will turn out as expected. Few things ever do.

Trump is doing a great job despite eight years of Socialist Obama and despite an attempted coup by wild-eyed Democrats, copying some kind of third world country since 2016. Whatever Trump does with Venezuela cannot be compared with the childish foreign policy of Obama and Clinton. They are chalk and cheese.

Tucker: All right, I just want to make sure that it is clear. If you care about families and you care about the human race — if you want to stop genocide — you will send your children to Venezuela to fight right now, without even thinking about it, without even weighing the consequences. You will just do it. Assuming you are a good person, of course.

Nobody is sending children, and parents of Marines do not make decisions about where they go to fight a war. Adults join the marines and agree to the terms, and know full well that they must go where they are ordered. Parents have nothing to do with such decisions. Also, they will not be sent ‘right now,’ or without careful consideration of all aspects of such a decision.

Tucker: If you don’t care about families or the human race — if for some reason you despise human happiness and support genocide — then you will want to join Satan’s team and embrace isolationism, the single most immoral of all worldviews. That is what they’re telling you. That is what they are demanding you believe.

Isolationists are not evil; they mean well but are uninformed. The problem is they dwell in 1800 with Jefferson, thinking that muskets and ox-drawn cannon can protect America from enemies who use a plethora of advanced weapons whose instructions travel at  186,000 miles per second. Our planet’s circumference is 24,901 miles, which takes an electronic command about 0.13 seconds to navigate. Push a button in Iraq, and a bomb goes off in New York half a second later.

Tucker: Message received. We’ve heard it before. But before the bombers take off, let’s just answer a few quick questions, starting with the most obvious: When was the last time we successfully meddled in the political life of another country? Has it ever worked? How are the democracies we set up in Iraq, in Libya, in Syria, and Afghanistan right now? How would Venezuela be different? Please explain — and take your time.

‘Meddling’ is the wrong word for Trump. Defending, assisting and helping is what America and its allies do when they are not punishing, attacking or supporting enemies engaged in nation theft, genocide or terrorism. Both the assistance and punishing is ongoing, happening in several places around the world, so I guess the ‘last time’ was a few minutes ago. Had Bush ignored Iraq it would be similar to Iran today, and armies of terrorists would still be alive. Today Iraq is a democratic, federal parliamentary republic far better to live in than undemocratic Iran, which is run by an Islamic despot stuck 700 hundred years in the past, who persecutes his people in numerous ways.

Tucker: Are we prepared for the refugees a Venezuelan war would inevitably produce? A study by the Brookings Institution found that the collapse of the Venezuelan government could force eight million people to leave the country. Many of them would come here.

Their coming to America is a different subject and entirely up to the governing political party of the time. Democrats want as many migrants as possible since most of them equal votes, and Democrats desperately need to replace dying baby boomer votes. If Trump prevails, he will curtail illegal immigration and punish Mexico for letting so many caravans (mobs) over their borders. Mexico will eventually take action to stop such hordes, so the prediction about 8 million Venezuelan immigrants is probably wrong.

Tucker: Our sanctions on Venezuela have already spiked our gas prices. That hurts our struggling middle class more than virtually anything we could do. So what is the point of doing that? So our lawmakers can feel like good people?

Trump’s revitalization of the oil industry in the United States will lower the price of gas, and such nitpicking is petty when viewed next to the terrible prospects of massive future wars that could come about if you let Chinese and Cuban communists infest Venezuela. After such battles, you will end up with far more Venezuelan refugees. Defensive wars are perfectly well justified.

Sending troops to Venezuela will probably lose too many votes for President Trump so my advice would be to do a deal with Juan Guaidó. An aid would go there with a top secret contract. In exchange for a few billion dollars’ worth of military equipment, cash, medical supplies, etc., enough to help Guaidó win, he would pay America back in several ways. Stipulations would include:

1)  Once Guaidó was in power, the coal and mining industries would be made operational. This might require funding. Once up and running these industries would pay 10% of their profits directly to the U.S. until the entire debt was paid back, with an additional 15% to make the exercise profitable.

2)  Guaidó would promise to allow a certain amount of capitalism to exist to prevent the usual economic problems caused by socialism. The terms for this would be negotiated, but some examples would be banks and businesses given freedom to operate without persecution, crippling taxes or unnecessary red and green tape.

3)  All communist groups associated with China, Cuba or North Korea would be expelled; forbidden to return.

4)  The contract would give permission for American forces to return and take control of critical parts of the government, should the terms not be followed, to oversee the payment of debts and the continuation of the agreed conditions.

In the situation Guaidó is in, he would almost certainly sign such an agreement, and American taxpayers would pay nothing in the long term. Libertarian arguments against helping Venezuela are mostly centered around cost. Using the above approach covers all expenses. Is Tucker against solving the problem when Venezuela pays for it?