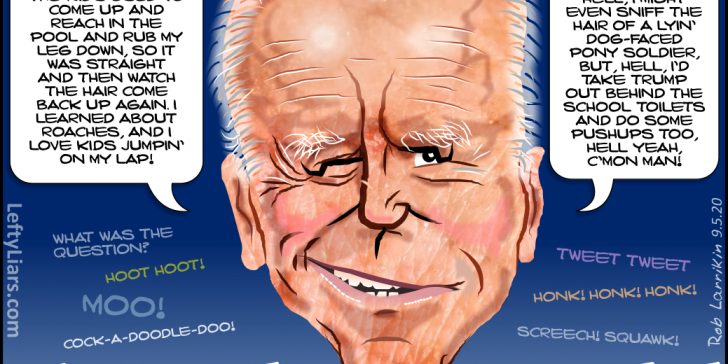 We all know that Joseph Robinette Biden Junior, AKA Joe Biden, is a useful idiot, but he is also a symbol of the fragmented, mentally deranged Democrat Party. Joe’s father, Joseph Robinette Biden Senior, thought it was necessary to give Joe his same name, including the middle name, Robinette. Clearly, Joe Biden Senior was proud of his feminine middle name, Robinette (his mother’s French maiden name). What kind of a man would call his son Robinette?

Joe Junior became a career swamp critter, which explains why he cannot fix things. He is good at wringing money out of taxpayers, making the country poor, and doing deals to gain power. During his decades in politics, he made many gaffs and sniffed way too many girls, but survived due to his socialist minders, Fake News. They covered over such embarrassments in a way they never would for Donald Trump. Had Trump sniffed just one young girl’s hair, it would be another Watergate nothingburger; another Russia Russia Russia hoax. They would rave about him being a pedophile for years until he was run out of office.

Joseph Robinette Biden Junior is now so old he cannot remember how to string a sentence together, and has to answer questions from pre-prepared notes, which he stumbles through with many stuttering mistakes. Democrats are either using the senile old fool as a Trojan horse; a hollow statue used to gain entry to the White House, after which he will be swapped for someone else, or be substituted just before the election. There is no doubt Hillary Clinton would like to be a part of that process, whether by replacing Biden just before the election or by becoming vice president to his successor just after. Regardless, the best-laid schemes o’ mice an’ Democrats are sure to go awry.

Joe is a perfect symbol of the Democrat Party itself: old, senile, stumbling, confused, and transparent. There is no method in their madness: lying, cheating, inciting violence, stealing votes, framing, exaggerating, creating dogma, and repeating the same mistakes perpetually.

They are beyond stupid; they are certifiably insane.

I used to write articles undoing their crafty lies. Now there is little point, as they no longer try to disguise them. They have gone right over the cliff, and everyone, even their followers, see through them.

Their ‘leader’ is like Georgie Porgie, from the 19th Century nursery rhyme:

Georgie Porgie, Puddin’, and Pie,
Kissed the girls and made them cry,
When the boys came out to play
Georgie Porgie ran away

Joe Georgie Porgie Biden likes kissing, touching and smelling little girls as they cringe and back off, but when it comes to taking on boys like Trump, he runs to his basement.

It is lovely to see the Democrats die – their death was always vitally needed and has been a long time coming. The hundreds of millions murdered under communism can finally rest in peace, for their dream will soon be realized.

In a couple of months, the world will change as Donald Trump is elected President for the second time. With an increased mandate, he shall energize the USA and truly make America great again.

Poor old Joseph Robinette Biden Junior will sit in the corner drooling at that time, unaware of his changing circumstances. Perhaps the 18th Century nursery rhyme Little Jack Horner would be appropriate for him then:

Little Jack Horner
Sat in the corner,
Eating his Christmas pie;
He put in his thumb,
And pulled out a plum,
And said, “What a good boy am I!