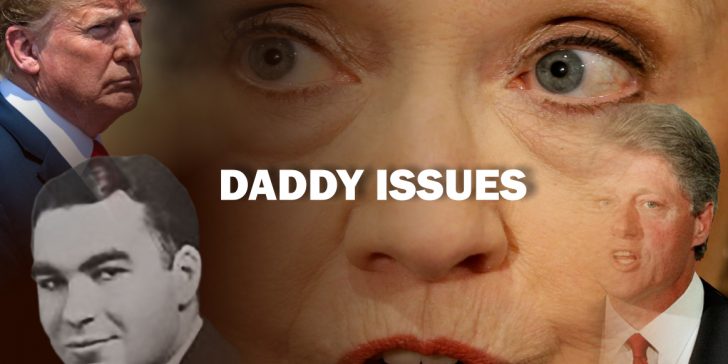 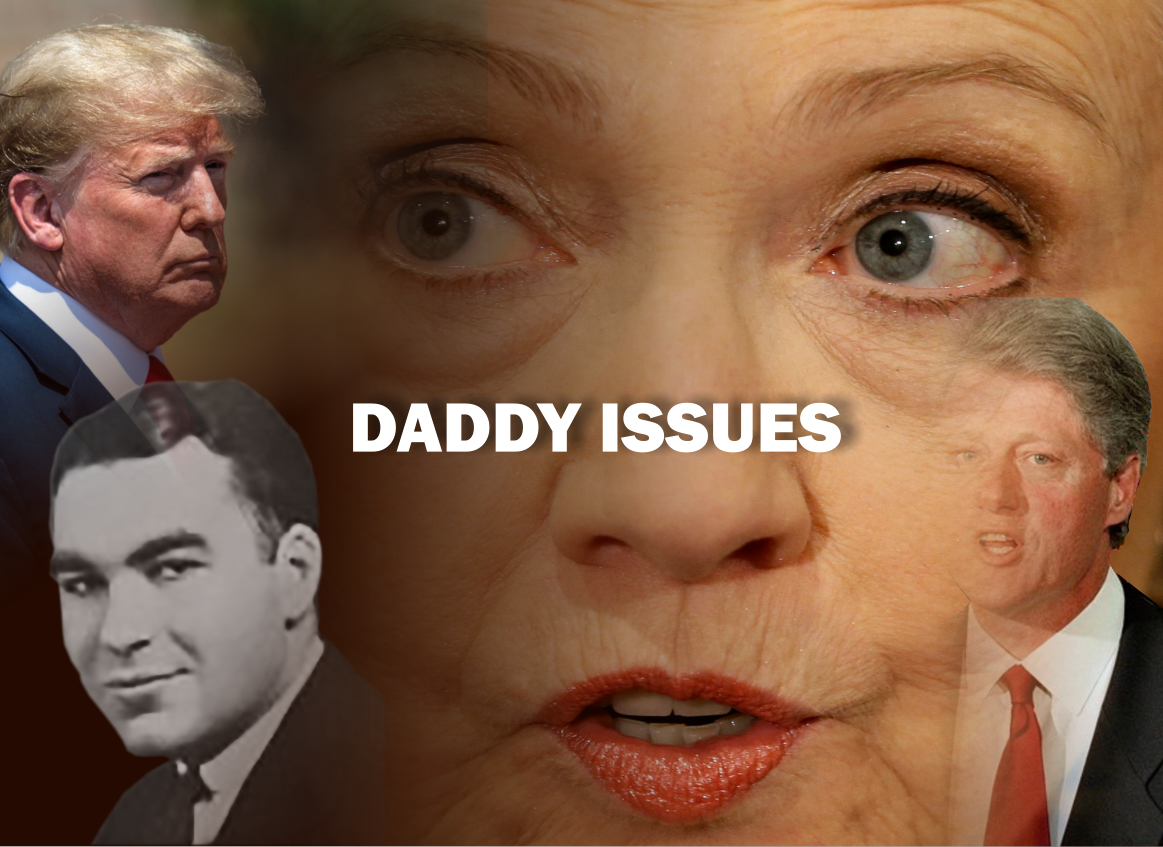 Hillary Clinton cannot defeat President Trump because she subconsciously sees him as a manifestation of her Republican father, Hugh Rodham, who perished 77 days after she became the First Lady. His death affected her profoundly, and it is believed that Donald Trump’s entry into politics stirred up distant memories of her father’s opposition to her own flamboyant liberal beliefs. To understand why she sees Donald Trump as a manifestation of her father, we need to go back and study some history.

Bill Blythe III
While still married to his third wife, a bigamist called Bill Blythe Jr. married Virginia Cassidy, made her pregnant, and died in a car wreck. Virginia gave birth to Bill Blythe III three months later, August 19, 1946. After going out with several men, she eventually married Roger Clinton, a hard-drinking, gambling, hell-raising, twice divorced, alcoholic car salesman from “Sin City” Hot Springs, Arkansas, in 1950. Virginia abused her son, Bill Blythe III, “in ways you wouldn’t believe,” according to Hillary Clinton. Virginia’s new husband was also abusive to her and their other son, which led to a divorce in 1962. Against the teenage Bill Blythe’s wishes, she remarried the wife-beater three months later. Even so, Bill Blythe adopted his surname to become Bill Clinton.

By contrast, Hillary Rodham’s upbringing was excellent. Her father, Hugh Rodham, who used proper discipline (spanking) to keep his children in order, founded and managed a textile business, while his wife did what women do best – homemaking. This environment gave Hillary a tremendous advantage. She was a perfect child and student, raised in a politically conservative household. For most of high school, she was even a Republican. College changed that.

As an adult, Hillary understood that a woman stood little chance of becoming President in the early 1990s, so she would do what women did for millennia. She would find a mule to ride her way to power. Perhaps Hillary made a list of vital requirements. If so, it might have looked like this: 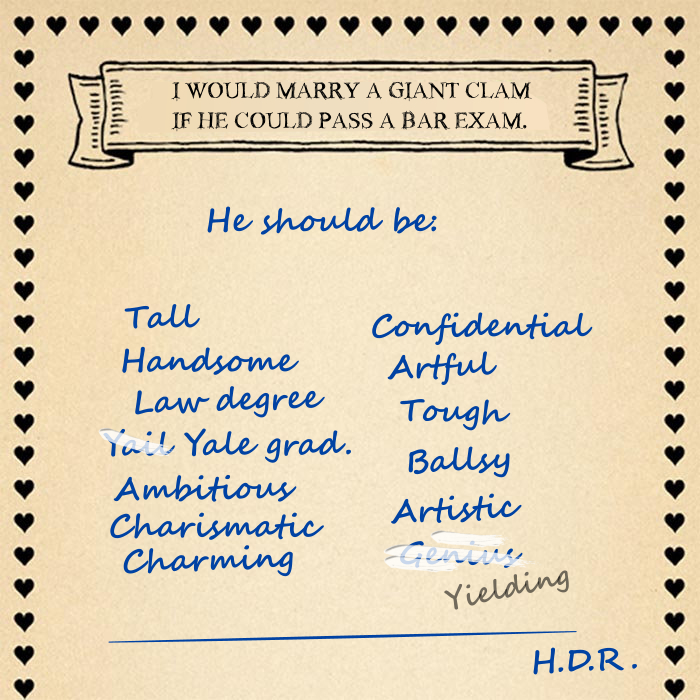 It was a long list, but Bill Blythe III Clinton, AKA Bubba, Slick, and Slick Willie filled the bill. He was artful, tough, ballsy, and even played the saxophone. The handsome dufus from “Sin City” managed to get a scholarship to University College in the UK, but dropped out. In his book, Unlimited Access, former FBI agent Gary Aldrich said Bill was no longer welcome at the college, which claimed his academic record was lackluster. Rumors persist that Bill forced sex upon 19-year-old student Eileen Wellstone in England, which led to his alleged expulsion from University. The penniless Southern Democrat later acquired a scholarship for Yale Law School.

Bill’s scholarship to Yale brought him into Hillary’s realm, who was a year ahead of him. Once they met, she stuck to him like burrs on his coattails, much to the chagrin of her conservative father. Hillary failed her bar exam in Washington – a fact she hid for thirty years. The couple passed bar exams down south in Arkansas, though Bill’s law license was suspended later for lying under oath about his relationship with Monica Lewinsky.

Many believe Hillary directed Bill with great determination, and say he was her ticket to great power. She would guide him in handling enemies, red tape, and political issues, for though Slick Willy Blythe was smart, Hillary was Triple C – careful, creative, and crafty. Without her, young Blythe would have probably been just another lawyer – perhaps a shyster lawyer, as Groucho might say. It harks back to my piece on the Founding Fathers’ wives. Women can be just as effective in politics through their husbands, without having to go into the political arena, and Hillary is a living example.

Although she was an attractive woman from a fine family, with a great sense of humor, and as smart as a whip, Hillary was also something else, politically. She was wrong.

And that is hardly surprising. College and Fake News brainwashed the middle-class girl with liberal ideology – mostly unbeknown to her father. As a conservative Republican, he assumed her college would educate her, not indoctrinate her politically. He believed a woman should raise a family at home and let the man go out to make money, but Baby Boomer Hillary would have none of that. Hollywood, Fake News, and her feminist teachers programmed her to believe that such women were losers, “suppressed” by men. Hillary decided to enter politics and make changes. She almost certainly felt that if Americans were not ready for a female President, she would marry someone they could vote for, and rule through him.

“Wait,” I hear you say. “If his feminist wife were steering a Sin City Arkansas hellcat like Slick Willy, surely his first few actions as POTUS would reflect this.”

Agreed. Let us take a look:

He became President on January 20, 1993. Within days he appointed Hillary as head of the Task Force on National Health Care Reform.
….
Two days after taking office… [he] reversed restrictions on domestic and international family planning programs that had been imposed by Reagan and Bush.
….
Nine days after taking office, he gave this speech (backup here) regarding his decision to lift the ban excluding gays from military service.

Less than a month after taking office, he signed the Family and Medical Leave Act of 1993, which forced big companies to let employees take unpaid leave for pregnancy.

Sure, that’s what a big goofy doofus like Bill would want: extorted jobs for pregnant women, unrestricted abortions, and filling the military with gays, all of which Hillary supported. What a way to start a Presidency. Nepotism and gays in the military. Hillary’s father died from a stroke 77 days after Bill’s inauguration. After seeing what his son in law and daughter were doing to his country, I am not surprised the conservative Navy vet bought the farm.

Hillary was eager to make America go Left, and this would hurt Americans time and time again. She achieved many goals, despite her husband’s bad habits, affairs, scandals, and lust for other women, but for the American people, the eight years between 1993 and 2001 were very destructive.

President George Bush did not repair much Clinton damage, and Obama took up where the Clinton’s left off. With Hillary’s help, Obama almost brought the U.S.A. to its knees. Bush routinely played golf with Clinton and Obama, doing his best to avoid Donald Trump. By that time, the Swamp in Washington had reached its lowest depths, and hard-working, honest Americans knew it.

Hillary revealed some of herself during Bill Clinton’s years as President, but not all. The Queen of Democrats came out from behind her curtain to campaign herself in the 2008 and 2016 presidential elections, exhibiting exceptional leadership ability. Despite her determined effort, she could not cope with Donald Trump. Many thought it was her health, and that was partly true, but there was a deeper problem. Every time Trump spoke, Hillary would remember her father’s firm, steady conviction, that authenticity that shines from conservative businessmen. Their words, backed up by experience, ring true, unlike ideologist’s hollow visions.

Haunted by Trump’s honesty, and memories of her father, Hillary lost the 2016 Presidential Election, which hurt her deeply. For the next three years, she was the world’s biggest sore loser, inventing a range of nutty excuses for her loss, while taking no blame herself. She went off to sulk, promising not to enter the next presidential race, and everyone believed her.

Months before television’s talking heads began ruminating about a possible Hillary return in the 2020 presidential election, it became clear to this writer that her silence regarding the other Democratic candidates meant one thing. She would make a surprise entrance as a last-minute candidate in 2020 and wipe them all out. The more foolish they looked, the more heroic she would appear in her Hollywood-staged return:

“It makes sense politically, promotionally, and psychologically, but most of all, it makes sense Clintonially. Using comrades as cannon fodder to boost one’s image comes easy to some people.”

The Left will ham it up with everything they have, and Hillary will be a goddess of victory to the poor, browbeaten democrat voters dimwitted enough to watch CNN, who will insist she is bound to win.

Trump Win
Of course, that will never happen. After years of rabid hyena behavior from Democrats and their Fake News cohorts, Americans are itching to tan their hides, come Election Day, and conservatives the world over will be celebrating.

Democrats cried in their soup after Donald Trump’s first election victory and will gnash their teeth after his second. Hillary will haughtily blame Americans for her loss, and like other peeved socialist icons, may leave the United States to retire in France. “I’m tired of America,” she might sneer. “The French understand.”

When Trump vanquishes Hillary in 2020, he will have more electoral votes and thus more power in his second term, reducing sabotage by the extreme Left Democrat Party. Since his wings will not be tied, he will accomplish miracles for the U.S. and live on in history as the greatest POTUS ever.

Hopefully, in her next life, Hillary will listen to her father. 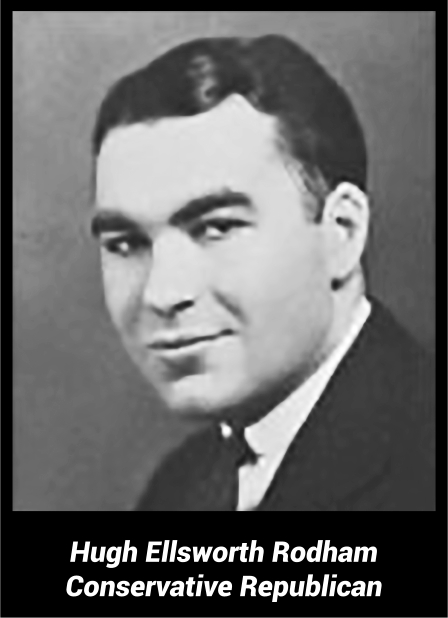 Hugh Rodham served in the U.S. Navy during WW2, before starting and running a successful textile supply business, Rodrik Fabrics. He then opened a fabric print plant building. Rodham was a Republican with a strong dislike of the Democratic Party. He believed they were one step away from Communism (Palm Beach Post, March 3, 2016 – page A2).

Rodham was a staunch supporter of Barry Goldwater’s 1964 presidential campaign and remained a committed Republican until his death. Even after his daughter married Democrat Bill Clinton, he “never gave up hope that his son-in-law would join him in the Republican Party and support a cut in the capital gains tax.”

Instead, she donned a man-suit to enter politics, jumped on a man-mule, rode him to the White House, and changed America for the worse. Yes, she was able to use her political position to make millions of dollars, and if money were her only incentive, she did well. But Hillary appears to be more interested in power and is furious with Trump for taking it away. That comes from entering the political arena with the wrong values. Choosing the life her father intended, she would have been far happier.

At a certain point over the last couple of decades, I think Hillary realized her father was right about many things, but it was too difficult for her to abandon a Party she supported for so long. Think of the connections and friends she would lose. So she kept on and said nothing about her actual views, which might have been fine until Donald Trump entered the fray.

Hillary can sweep away most men with a few harsh words and a wave of the hand, but finds it impossible to sweep away her father. When Trump spoke, it must have made her knees weak. How could she keep her usual veneer of invincibility up? Donald’s words were like Hugh Rodham’s, and this was her Achilles heel.